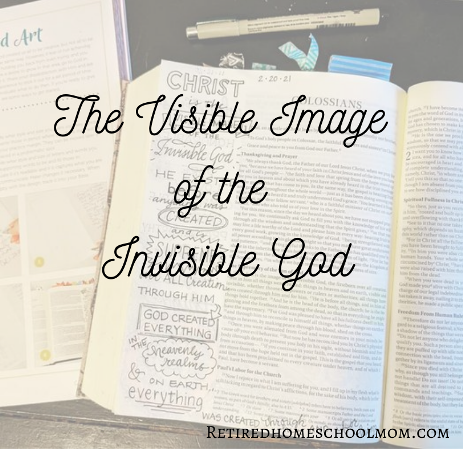 Have you ever thought “If only I could see God.”? The Bible tells us in Colossians 1:15 that we CAN see God in the form of his Son.

“Christ is the visible image of the invisible God.”

We can see him and know him. From before time began, Christ has possessed the exact qualities, attributes, and abilities of his Father – his power, love, mercy, holiness, goodness, wisdom, and peace. In John 14:8-9, we read this as well. “Philip said, ‘Lord, show us the Father and that will be enough for us.’ Jesus answered: ‘Don’t you know me, Philip, even after I have been among you for such a long time? Anyone who has seen me has seen the Father.’”

While Genesis 1:26-28 tells us that humanity is created in the image of God, Jesus WAS the image of God. My son bears a great likeness to my husband, but he is also uniquely himself. My son can tell you a lot about his dad because of the amount of time they have spent together, but he doesn’t know his father’s every thought and he doesn’t possess all the same abilities. Jesus, on the other hand, is the exact same as the Father and to know Jesus is to also know God. In John 10:30 we read Jesus words, “I and the Father are one.” The author of Hebrews 1:3 says that “The Son is the radiance of God’s glory and the exact representation of his being, sustaining all things by his powerful word.

What does that mean to me? It means that my God is personal. I can know him. He was alive here on Earth, fully human, yet is eternal and omnipotent. He loves us so much that he CAME TO US – he didn’t just watch us from afar, or set things in motion and then move on to other interests. Like the father of the Prodigal Son, he ran to us, clothed us with grace, so that we could return to our home fully forgiven and redeemed. Through the Gospels, we have his very words; we know the kind of man he was from the eye-witness accounts of those who lived with him. This is sometimes too much for my brain to fathom – how much he loves us.

Thank you for stopping by. You are important. Have a wonderful week!